E.J.Mather, who was instrumental in the formation of the Mission to Deep Sea Fishermen, went out to the fleet in the course of his research on the carrier Supply in August 1881. He later spent some time on board a smack, and his descriptions of transferring the fish were published in his book “Nor’ard of the Dogger”, published by Nisbet and Co in 1888. The following descriptions are based on his observations.

“We came up with the Short Blues about 300 miles from the Thames, and though I had frequently passed through fleets of herring, mackerel and pilchard fishing craft, I was not prepared for the imposing sight of 220 smacks of from 50 to 80 tons burthen, their tanned sails reflecting the most brilliant scarlet in the rays of the setting sun and extending for several miles east and west of the Admiral’s vessel.

A signal from the Admiral was the start of a wild scramble to get the empty fish trunks which we had brought from London. Boats manned by crews as rough, unkempt and boisterous in manners as experience, put off from the smacks, and our deck soon swarmed with some 400 of the wildest fellows I have ever seen.

As soon as all the boxes were out, the delivery of fish commenced, but the crush of boats around the steamer was so great as to become a source of danger, each crew endeavouring to gain the first turn and circumvent their neighbours; the painters were hopelessly tangled, and there seemed every prospect of a free fight on the deck of the cutter, when the Captain settled the matter in a rough and ready fashion by casting off the ropes and steaming ahead for fully a mile.

This gave a little breathing space to the men engaged in stowing the fish in the carriers hold, and allowed time for the angry passions of the boat’s crews to expend themselves in a spell of hard rowing!

The mate was busily engaged, with a band of active helpers, in stowing away in the hold the trunks of fish which had been piled on deck, each layer of trunks being in turn covered by a layer of ice, and so on, layer upon layer, until the hold had received no fewer than 3,007 trunks.

Meanwhile the Admiral had signalled his instructions that the fleet was to “sail”. In other words, they were to  move some 30 miles to the westward before shooting their trawls. The consequence to the steamer of this decision was to leave us with a diminishing crowd of attendant smacks and boats, until presently the last laggard had put their fish on board, and the mate came on the bridge and reported the number of trunks shipped.

Without waiting another instant, the skipper, who for the previous half hour had been fidgeting with his watch, telegraphed the engine room “full speed ahead”, and by 9.30 am we were ploughing our way towards the Thames in the teeth of a strong southwesterly breeze, the hatches battened down, the companionways all closed, every movable article secured, and the heavily laden steamer burying herself to such an extent, as she forced her way through each successive billow, as to give the bridge and smoke stack the appearance of an island, the hull being at times completely submerged.” 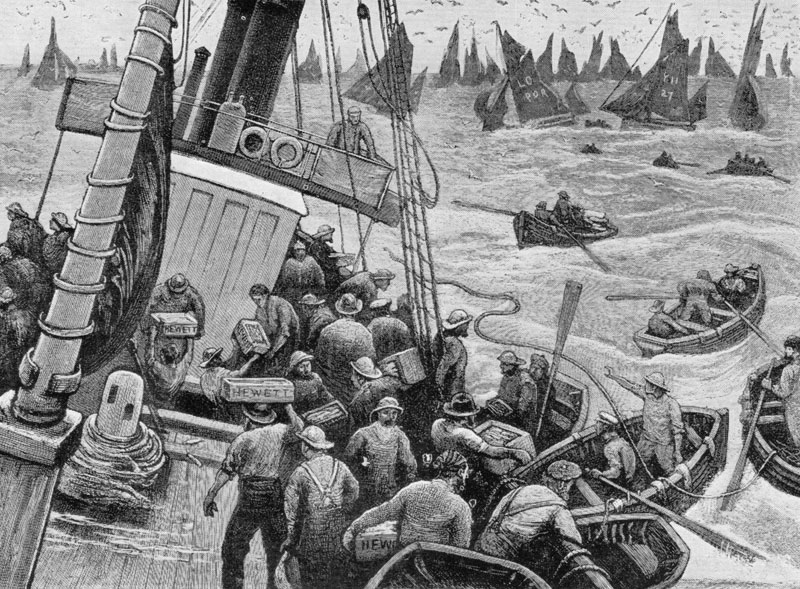 The viewpoint of the smacksman is similarly described:

“I now had an opportunity of seeing, from a different stand-point, the dangerous service which had on former occasions so impressed me when witnessed from the bridge of a carrier. The stern of the massive boat was hoisted on the vessels rail by the combined efforts of the whole crew (the skipper being for the moment at the tiller), and then with one mighty effort, in response to the mate’s cheery cry of “Shove together my lads!” the boat was bodily pushed over into the sea, and lay alongside, tugging at the painter with convulsive snatches, like a restless hound eager to be freed from the leash.

The third and fourth hands, in full regalia, leaped into the boat, and commenced stowing the boxes of fish under the thwarts; this done the fifth hand joined them, and the skipper passed down the “fish note”, which the third hand carefully hid away in his sou’wester, and the smack having now arrived within 400 yards of the carrier, the boat was cast off, and made its way over the intervening space of what was rapidly assuming the appearance of a boiling cauldron.

To me the spectacle was appalling enough, but the others seemed to make light of it, although I fancied there was a shade of uneasiness on the skipper’s face.

“How do you like the prospect for your boat’s crew, skipper?” I asked.

“Not at all, sir. There’s a nasty swell this morning, and this rising breeze makes the sea very choppy. I almost wish I’d kept the boat aboard.”

“Then why didn’t you? You’re your own master.”

“True, sir, and I shall only have myself to blame if anything goes wrong; but you see other boats putting off, and I didn’t like to be behind the rest of ’em; but I shall be uncommonly glad when that boat comes alongside again.”

Meanwhile the perilous task proceeded, and more than once as two seas, careering at right angle, suddenly converged, it seemed for a moment that no power could prevent a catastrophe. Yet the staunch boat, now little more than a red speck in the distance, rose amid the wild smother of the breaking surge, and held on her course for the carrier, whose unwieldy bulk rolled and plunged madly among the cross seas.

Away beyond were smacks, some of which, like ourselves, had sent away their boats, and were now awaiting their return, although others had evidently concluded that discretion is the better part of valour, and were heading away after the Admiral, who had lost his gear through coming fast to a sunken wreck during the night.

Presently our boat was observed to reach the steamer, and the skipper uttered a sigh of relief as he saw one half of the dangerous errand safely accomplished. Then came the return journey. True, the boat was not so heavily weighted, for 12 trunks of fish, representing a total of 11cwt., had been transferred to the carrier; but to be without ballast was not altogether in favour of a safe passage, especially as the force of the wind was momentarily augmenting, and shaved off the crests of the travelling seas, as with a knife, driving volumes of salt spray high around our vessel as the blast came tearing through the rigging with ever increasing velocity.

No more skylarking now! Each man seemed profoundly impressed with the gravity of the situation, and by common consent there was dead silence, while every eye was fixed on the red speck, at one time carried high upon a huge wave, then for several seconds entirely hidden from view.

The suspense was terrible, and we all knew well that nothing could save our shipmates if their frail craft were capsized by the vicious seas. Still, on she came, the distance quickly diminishing; for the three men who strained and pushed at their oars were evidently keenly alive to the necessity for haste, and they urged the boat up and down the liquid hills and forced her through the broken water with the determination of brave men wrestling with death.

They were now within hailing distance and our skipper, who, with knitted brows and compressed lips, had been anxiously watching their progress, for the first time broke the spell by crying in stentorian tones, “Keep it up, my lads; another dozen strokes and you’ll fetch up alongside us…”

The last word was cut short and terminated in a groan, which was re-echoed from every lip, for the bow-oar was seen to snap just as a rushing eddying roller caught the boat’s quarter, and for one instant all appeared lost. But no; although the volume of angry water roared and hissed around, the danger was averted by the skill and presence of mind of the third hand who, shouting to the bow-oar to away with the broken piece, managed, by skilful manipulation of his own oar, to keep the little craft from canting.

Within ten seconds the swirl of a breaking sea swept the boat with a crash alongside the smack, and before she could recoil from the blow the painter had been thrown and caught, and in another moment the three dripping and exhausted smacksmen were safe upon our deck.”