Trawling as a method of fishing had been used by the Barking men for centuries, despite its reputation as a despoiler of grounds and destroyer of young fish when used inshore. Most of the trawlers worked the grounds of Yarmouth, the “Broad Fourteens” and Smiths Knoll. With the advent of the use of ice and the fleeting system deepsea trawling was to become the primary method of fishing employed by the Hewett family and their Short Blue Fleet.

The Beam Trawl.
Quite when the beam trawl was first used offshore for deep sea trawling has been a matter for much discussion over the years. The credit is claimed by both Barking and Brixham fisherman and it is highly unlikely that the question will ever be answered definitively. What is more likely is that the system was evolved at about the same time by both ports. As the Brixham vessels fished the North Sea on a regular basis, some trading of ideas must have taken place, and each port, in an attempt to outdo the opposition, would have developed their own system. This certainly was the case when it came to the design of the trawlheads, which are different shapes when used by the different ports.

The basic design of all beam trawls was the same wherever they were used – both in this country and abroad. The net was a triangular bag about twice as long as it is wide, with the mouth held open horizontally by a beam and held off the ground by two trawlheads, one at each end of the beam. The top half of the net is fixed along the beam, and the bottom is cut back behind in a semicircle so that when the groundrope reaches the fish the beam has already passed overhead and there is a shelf of net above the fish to prevent escape. The fish are swept back into the codend where they are held by flaps of netting. 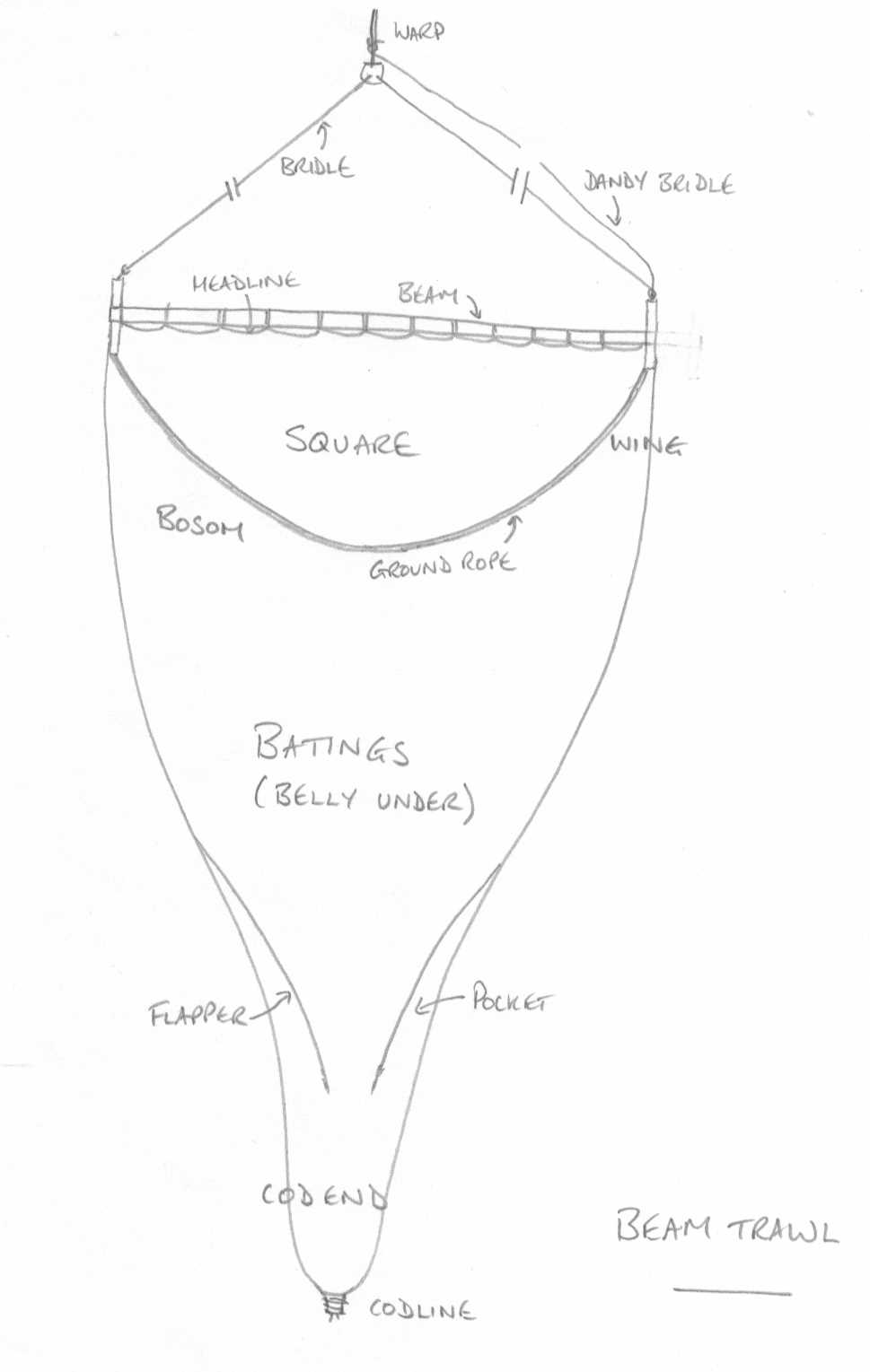 The trawl was towed downwind and hopefully downtide. Typically the net would be towed at about 1 to 1½ knots through the water, which would be increased by the tide to some 2 to 3 knots over the ground. A reasonable amount of wind was necessary; enough wind to drive a smack along at 9 knots free running would only produce a speed of about 1½ knots when towing the trawl.
The beam held the net open when it was being towed. The Barking men used a 36-38′ (11m) beam which was a shorter beam than others further north. This was because they worked areas with stronger tides, and too much power would snap the beam and collapse the net. The beam was usually elm, but ash, oak and beech were also used. To provide strength and suppleness it was natural grown, and when, as usually happened, sufficient lengths could not be found, then two lengths would be scarphed together and the joint strengthened by iron bands.

The beam was held off the ground by the trawlheads. These were made of iron as they had a second function – that of keeping the whole net down on the seabed. The shape of the head varied around the country, with most places using a distorted D shape. The Barking and later the Yarmouth men used a stirrup shaped head. The weight would vary as to the size of the trawl and the amount of tide experienced on the grounds, and therefore the Barking men used heads weighing 360-400lbs (163 – 181kg) which was heavier than elsewhere (230-360lbs) (104 – 163kg), but it was not good to have too much weight as it made the trawl more difficult to handle. 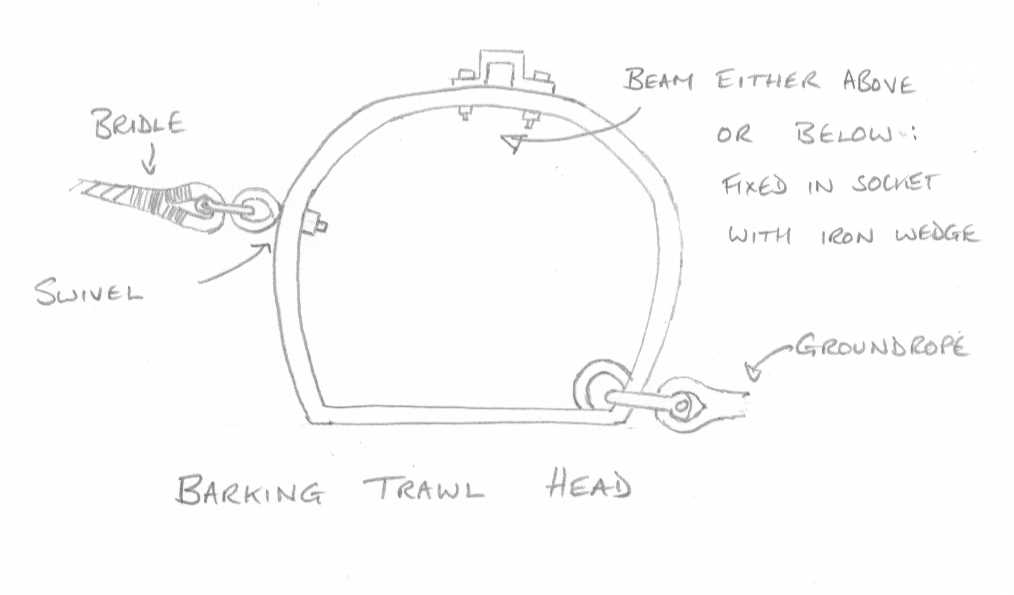 The ground rope was made from an old hawser, overlaid with lighter rope as a chafer. Old hawser was used so that the ground rope would break if the trawl snagged an obstruction or “came fast”, and only the groundrope itself and adjacent netting would be damaged rather than breaking the beam or even losing the whole trawl. It was also important from the safety angle because if the smack was held by her gear in a heavy sea she could be swamped. Sometimes the groundrope was weighed down by short lengths of chain and sometimes “tickler chains” were attached so as to dig further into the sea bed and bring up more fish.

The trawl netting was put together on board the vessel, and a large amount made by hand, particularly in the early days. The panels were of such a shape that other methods were impossible. The belly and back of the net were tapered down to the codend (cod is derived from the Anglo-Saxon for sack and has nothing to do with the fish of the same name). The fish were prevented from escaping from the codend by a flapper of net hung from the back, and by pockets of net fitted to the sides of the trawl. The trawl netting as a whole was held open by the passage of the trawl through the water. In the large trawls there were four mesh sizes, reducing from four inches square in the back to 1½ inches in the codend. The twine used for the belly was usually twice as thick as that used on top because of the chafe, and old bits of net were attached to the bottom of the codend as chafers.

The complete trawl was towed by a trawl warp which was generally a 6 inch ((15cm) hawser some 150 fathoms (275m)long, made up of two 75 fathom (137.7m) lengths spliced together. The end of this warp was shackled at the trawl end to two “bridles” of 15 fathoms(27m) each, each one going to a trawlhead where they were attached by shackles and swivel-bolts. A further small rope called the “dandy bridle” was also attached to the side of the beam which was to be hauled aboard aftside, and led along the main bridle and tied just forward of the bridle/warp connection. This warp was only used for hoisting the beam aboard the smack and played no part in the fishing operation.

The Otter Trawl.
During the late 1890’s trawlermen, including Robert Muirhead Hewett, started experimenting with otter trawls. Steam trawlers could maintain a constant speed and thus there was no danger of the trawl collapsing due to loss of speed. It was shown that the mouth of the trawl could be held open by attaching an angled board to each side of the trawl. Properly known as otter boards, they soon became known as “doors” as they were about the size of a door. Beam trawls are restricted in size by the length of the beam (too long and they break) but these new otter trawls were not restricted in size. They were soon proven to be more efficient than beam trawls when fishing for round fish. 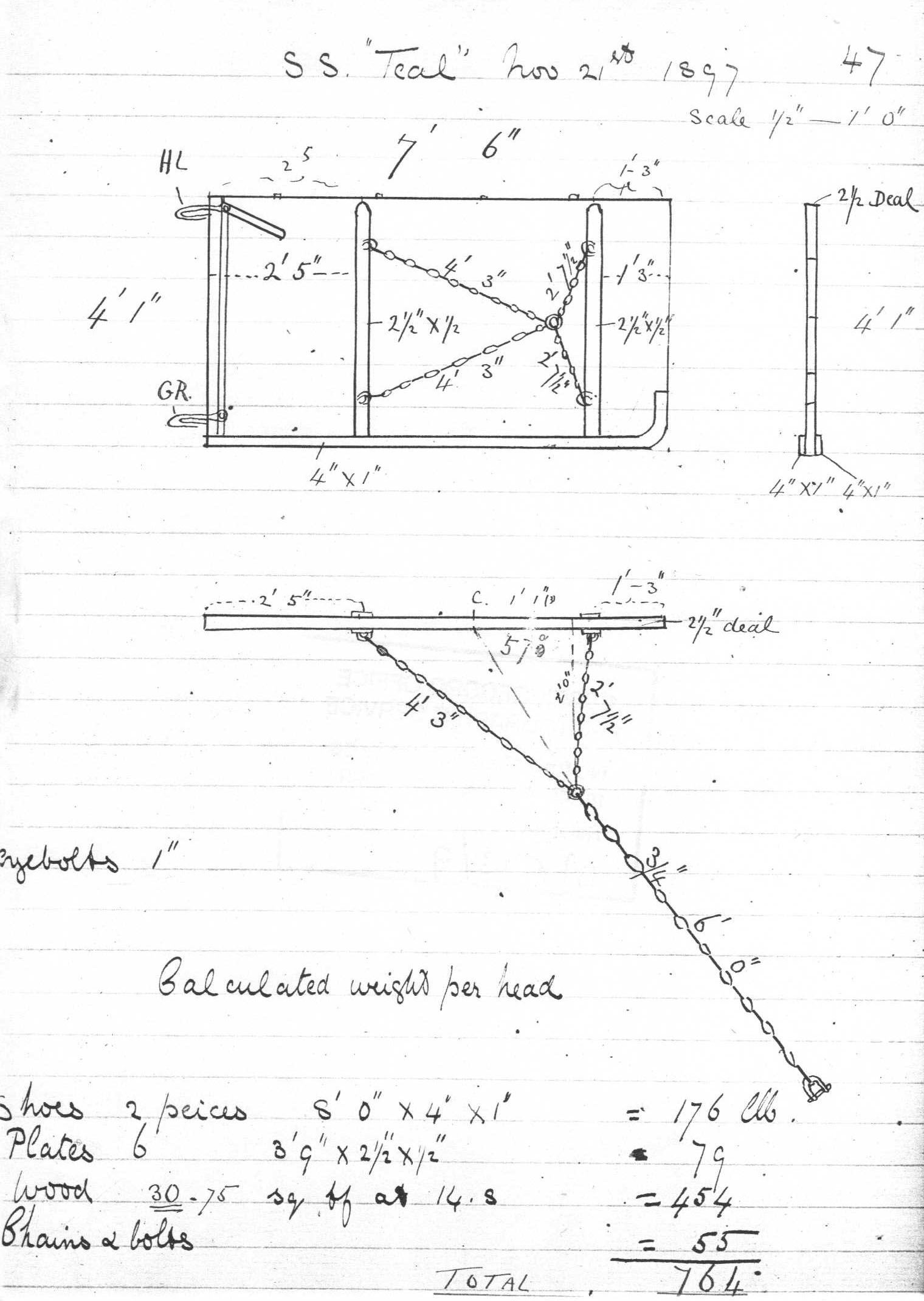 Initially the trawl boards were attached to the edge of the nets. In the above drawing you see the abbreviations HL for headline and GR for groundrope where they attached to the board.

In time it was found that the width of the trawl could be very effectively increased by attaching bridles between the otter boards and the net – this took a bit of setting up but greatly increased the area of seabed swept. 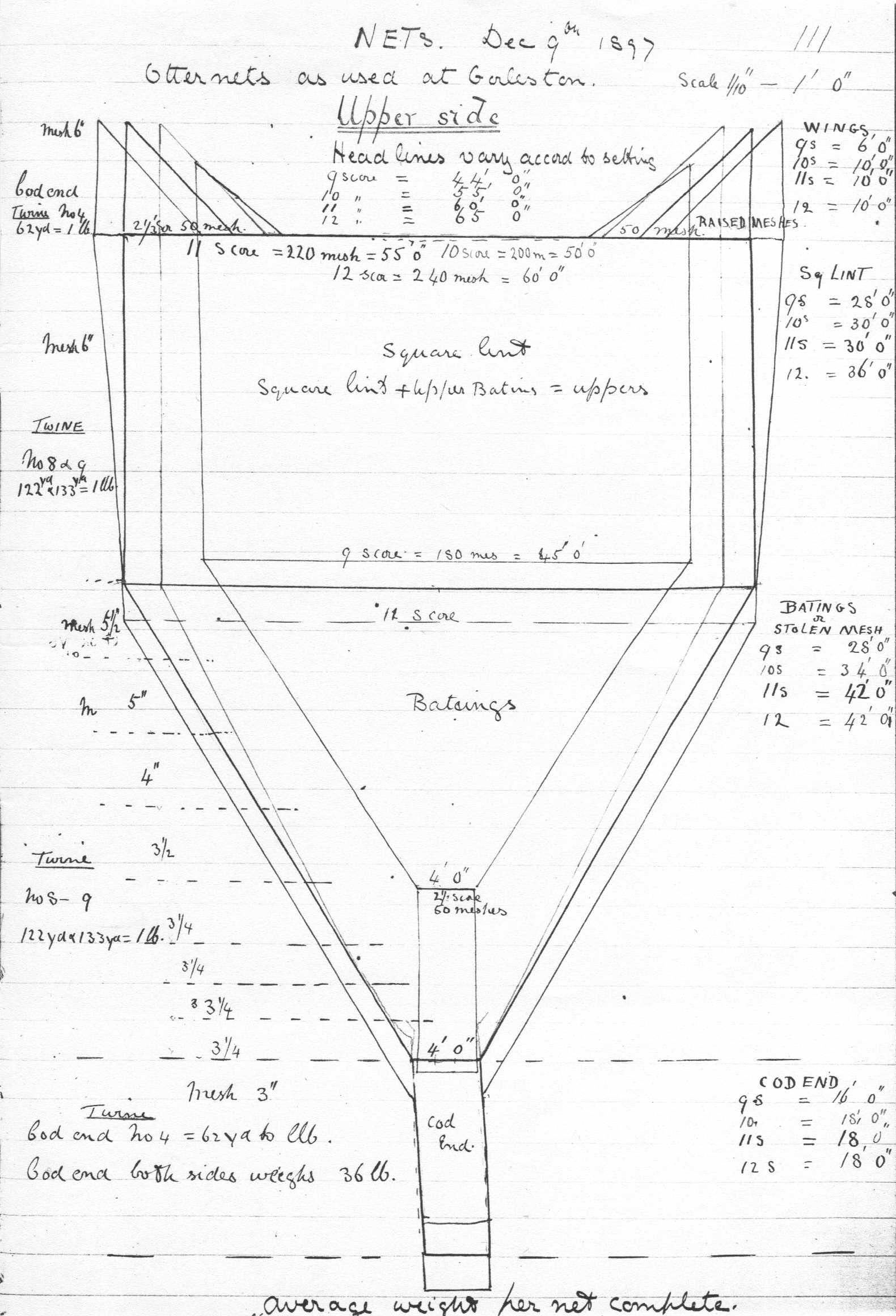 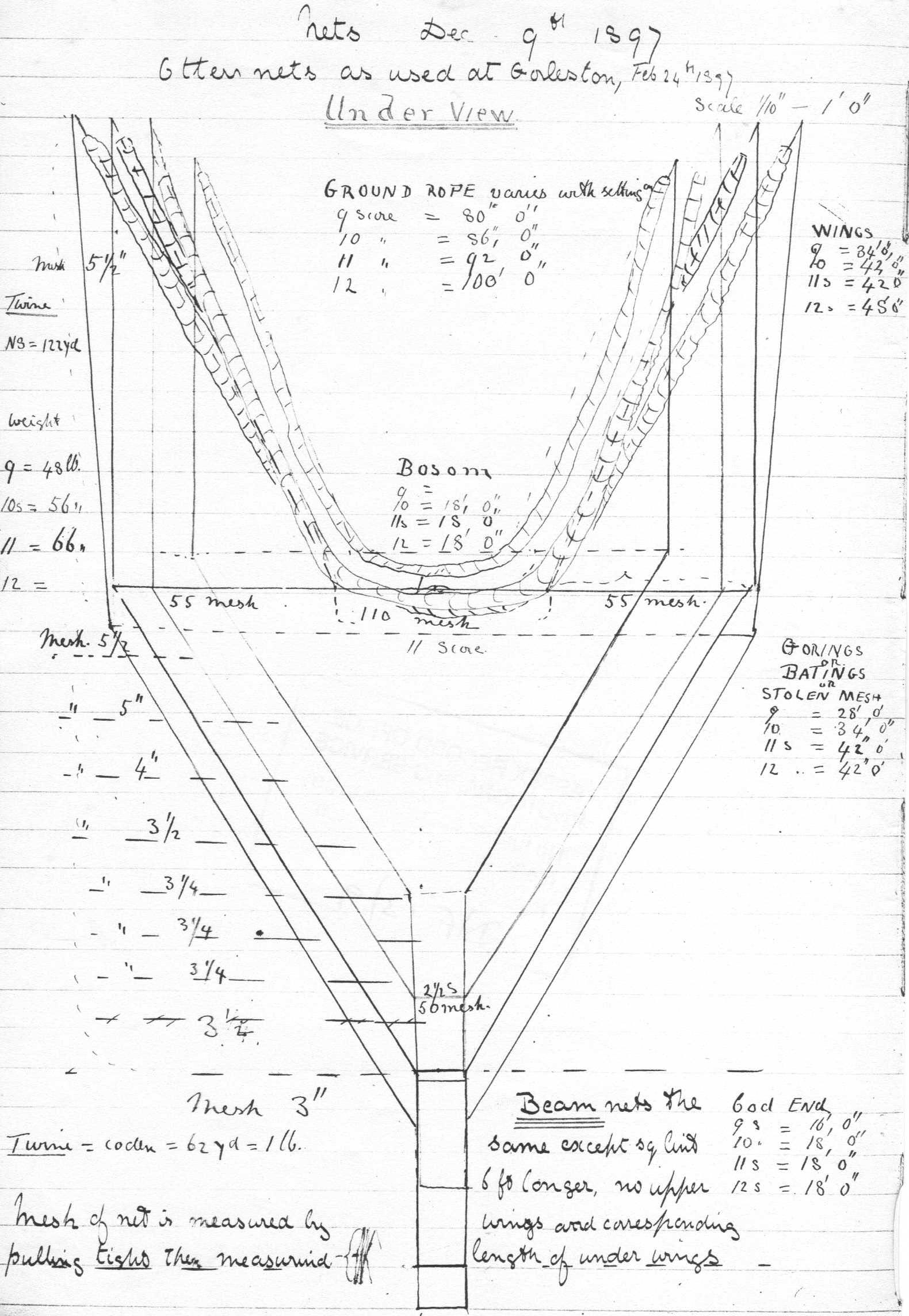 Somewhat surprisingly the otter trawl evolved little from it’s initial form until the 1960’s when synthetic twine replaced natural twine and the 1970’s when side panels were added to give extra headline height. The midwater trawl also appeared in the 1970’s. In the late 1900’s the twin rig trawl whereby two trawls are towed side by side.