The Short Blue Fleet landed nearly all of its fish at Billingsgate during the 19th century, but Shadwell market was set up and run by Robert between 1885 and 1899.

The name Billingsgate is thought to have originated as Belin’s Gate, and it is most probably the oldest dock (as it was before 1850) and quay in London. It is also the closest point of approach to London from the south of the river, and ferries used to operate from the site. If one goes back to 976 A.D., the time of Ethelred, it was the only quay for the port of London, but boats landing fish were subjected to lower charges (one halfpenny per boat) than other vessels.

Billingsgate continued to trade for centuries in its original form, and fish has been sold from there continuously from the 14th century. Up to the 17th century commodities other than fish were landed here as well. Over the years the methods slowly evolved so that porters were licensed and regulated. Billingsgate was made a free and open market for fish six days a week (and for mackerel before church hours on church days) by Act of Parliament in 1699. Further laws, notably of 1710 and 1750, regulated the purchase and sale of fish. 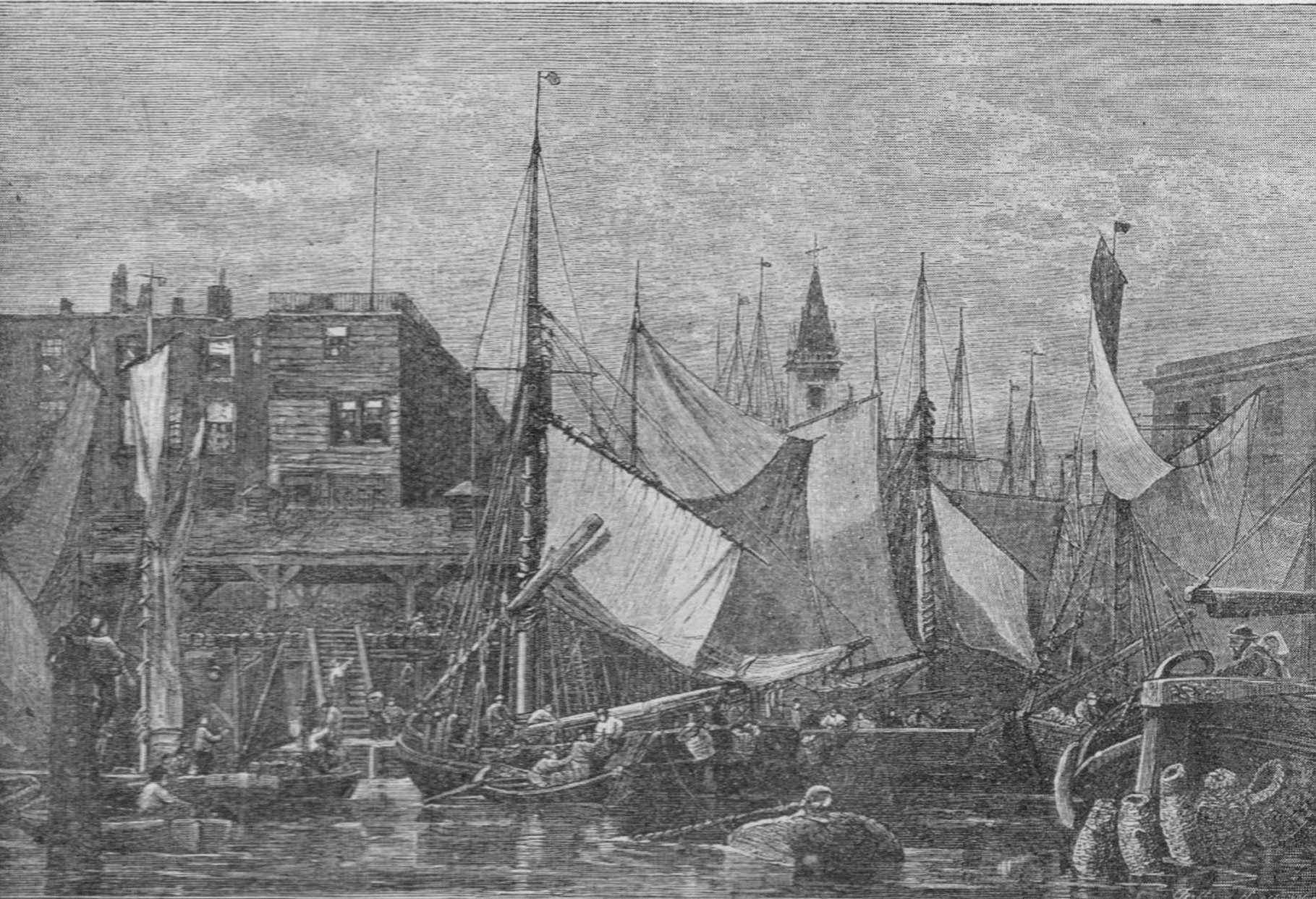 In the early 19th century, and especially when Samuel started using ice and fleeting, trade began to increase. It was decided to extend the market in 1847, and this was completed in 1850. In 1848 some 108,739 tons of fish were landed at Billingsgate. This modernisation included the infilling of the old dock in front of the market, and rasing the collection of fishermens’ huts, hovels, and low drinking dives that surrounded the market. The City Corporation, who own the site, spent £30,000 providing the first covered market.

The market, now reinvigorated, traded more and more fish. The railways, especially from Grimsby, allowed supplies to arrive from further afield and it was not many years before it was no longer big enough to cope with the volume of fish. The construction of a new larger market was started on 27/10/1874, and was completed in September 1876. Electric light was installed in 1878. This market was much better, but even so in a report of the Corporation Commission in 1881 the market was declared insufficient for the supply of the metropolis.

Edgar March gives a good account of Billingsgate in the early 1880’s, which is when George and Robert M. would have been controlling the sales for Hewetts. The tale starts with the arrival of a carrier…

“Gangways were run out and the full trunks carried ashore by licensed fish porters who, in 1880, made more money in less time than any other unskilled labourers in Europe according to a contemporary account. The licence cost 2/6d, including official brass badge, and the men could earn 20s a day, being finished by 10am, a striking contrast to the toil and earnings of the men who caught the fish far away in the bitter North Sea.

One stream of porters trotted down the springy gangway, each man picked up a full trunk, balanced it on his head and went up the other plank into the market to dump his load at the appropriate stand. It was Hewett’s pride to put the first lot on sale before the last stroke of 5am had ceased to vibrate, the official opening of the day’s market.

Then arose a babel of sound from the 140 or so stands, trunks or heaps of fish being sold at auction; the winking of an eye, nod or whatever sign was used by a buyer seeing a lot change hands in a matter of seconds. To add to the din was the clatter of hooves and the thunder of iron-tyred wheels as vans rumbled over the granite setts with consignments from the railway termini. Huge cases, 12ft to 15ft long, 6ft to 8ft wide, and 3ft deep, clamped and bound with iron, contained fish packed in finely ground ice sent off from Grimsby and hoisted on to specially constructed lorries, drawn by two or more horses. Many of the Great Eastern boxes were on wheels, lifted off open trucks at the station and the horses attached.

The West End fishmongers and the buyers for the big hotels walked around the alleys between the stands and made their decisions as to which fish was to be the day’s speciality.

A considerable proportion was sold twice over as the small men could take the large lots from the salesmen and they bought later in the day from the bummaree [from the Dutch], who would divide his purchases into parcels of as few as two or three fish The market was at its height from 5am to 9am, by which time most of the fish was sold and was on its way to the shops.

After the big buyers had finished came the turn of the costers who purchased vast quantities of haddock for smoking in the curing houses in the neighbourhood of Walworth and Kennington.

The staff at Billingsgate then numbered about 1,100 porters besides constables, detectives, clerks etc. By evening the market was all washed down clean and ready for similar scenes the next morning.”

Samuel senior was a salesman and first sold fish at Billingsgate on September 17th 1827, and he used to drive up to London from Barking every day in order to be at the market by 5am, having always put the pistol case in the back of the carriage. His son Samuel was also a salesman, and was indeed known as “the salesman”, until he left the business in 1864 to run his own business. His brother George also sold, and Robert M. was a salesman for a while. He was a licensed auctioneer for some 15-20 years, but only sold during his first few years in the business which were spent at Billingsgate. He appears to have set some sort of record for auctions, as he sold in one day from 5am to 4pm over 1,500 packages, each separately, without a break. There were four other auctions going on at the same time, but with relays of salesmen.

The rise in the throughput of fish from Grimsby by the new railway brought into focus the monopoly on the sale of fish that was held by Billingsgate. A philanthropist, Lady Burdett-Coutts, formed the Columbia market by Act of Parliament in 1866 “for the sale of meat, fish, vegetables, poultry and other provisions” in order to supply cheap food “for the poorer classes”. The market was built for £170,000 and was opened in April 1869 as a general market and it traded as such until the following February. It was then considered to be a failure, and it was proposed that it should be converted to a wholesale fish market.

In April 1870 the Corporation of the City of London suggested combining Leadenhall and Billingsgate markets inland near to the railway because the supply of fish by sea was dropping. The number of craft landing at Billingsgate had dropped from 10,700 in 1838 to 3,900 in 1866 and even further to 1,822 in 1869, although the size of vessel landing was increasing. An anonymous letter to the City Press of Saturday April the 9th 1870 claimed that “four fifths of the fish comes to London by railway. The whole trade (with the exception of Hewett’s) prefer fish delivered by land carriage. Hewett’s steamers cannot land at the Wharf  [Billingsgate]; every package is brought ashore by lighters.” The fish landed at Grimsby was loaded straight into railway trucks (these were specially designed for carrying fish and were known as “Grimsby Machines”), from either the fishing vessel or from the cod chests, and was therefore fresh and had not been handled greatly when it arrived in London. In 1870 the Great Eastern Railway carried 24,488 tons of fish to London, and the Great Northern Railway 22,000 tons, in all about half of the total supply.

Thus Lady Burdett-Coutts entered into discussions with the Corporation, with the outcome that she gave the Columbia market to the Corporation in 1870. In 1871 an Act of Session proposed that the Great Eastern Railway should be extended to the market by tramway; meanwhile the market was receiving fish from all over England, Scotland and Ireland. The Columbia Market Tramway Bill of 1873 was to allow the building of the tramway, and a small locomotive was to be used to transfer the fish from the railway to the market at 0500 hours. By this time, however, many peopole were of the opinion that the Corporation had procrastinated for too long and wasted far too much time getting the market into operation, and Billingsgate survived, and as stated above was, within a short space of time, renovated.

It was because of the continued lack of space at Billingsgate that Robert proposed to build his own market at Shadwell in opposition. In 1882 Robert appeared before a House of Commons Select Committee, with Mr Gladstone in the chair, to promote a Bill for Shadwell Market. He stated that the Short Blue Fleet, including those that owned their own ships, totalled in round numbers about 200 vessels, and that at that time eight steam boats were employed in carrying the fish from the fleet to Billingsgate. He also said that the average annual catch value brought in during the previous seven years was £180,000 p.a., or £1,210,490 in total for the period.

The London Riverside Fish Market at Shadwell was opened on November 9th 1885, despite opposition within the family from George and Robert M.. They were both in much closer contact with the market than Robert, who rarely came to town more than once a week, and was sometimes away all winter (he moved to Roden Lodge in Barking in 1871, although he did not buy the house until 1873). It was felt that the project had been put into motion too late, and this was unfortunately to be proved an accurate assessment. In 1880 the G.I.C. fleet from Grimsby had started to run carriers to Billingsgate, and they were followed soon after by the Red Cross and Great Northern fleets from Hull. This extra throughput of fish was sufficient to replace the volume put through the market by the Short Blue Fleet, and in 1888 the increase in the ground area of the market by 5,000 sq ft reduced the cramped conditions that had persuaded Robert to move. Thus the costermongers and bummarees were happy to stay at Billingsgate rather than move to Shadwell. The inland Columbia market, owned by Miss Burdette-Coutts was also in opposition, although this venture was even more unsuccessful than Shadwell. The market at Shadwell lost a large amount of money, and was eventually sold to the Corporation of London 1899 after the explosion at Barking, and they turned the 9 acre site into a recreation ground which is today called the King Edward Memorial park.

Robert M. later said that he felt that had the market been started at any time before 1877 then it would have been a success, but that it would have been foolish to try on an inland site without the input from the Short Blue Fleet.

The space available at Shadwell did, however, allow Hewett and Co to buy an artificial ice plant from the German company Linde and Co. This ice plant was much more successful than its predecessor at Barking. It was the largest artificial ice plant to date and could supply ice economically: and the carriers could be loaded direct as soon as the fish had been landed. The collection of ice from the marshes and the use of the ice houses gradually decreased as this plant took over.