The handline method of fishing is different from longlining, which will be described later. Handlining is probably the oldest form of fishing known to man, with the exception of the spear.
Handlining was used on the Iceland and Orkney fisheries, and by some boats in the southern North Sea for the cod that follow the herring. The home waters fishery lasted from July to October, mostly about 10 to 30 miles from the shore as the herring moved in closer to the land.

The handline was about 45 fathoms (80m) long, and at the end was a lead sinker weighing between 5½ and 7 lbs (2.5 – 3.2kg). This sinker had a thick iron wire called a sprawl wire fixed through the top at right angles, and to each slightly downturned end was fastened a snood of thinner line about 6 ft long with a single large hook on the end. Sometimes the snood was fastened to the hook by a number of open strands of soft twine, about 3 inches (7.6cm) long, to prevent the fish biting through the snood; this system gradually fell into disuse and the snood was tied directly to the hook. 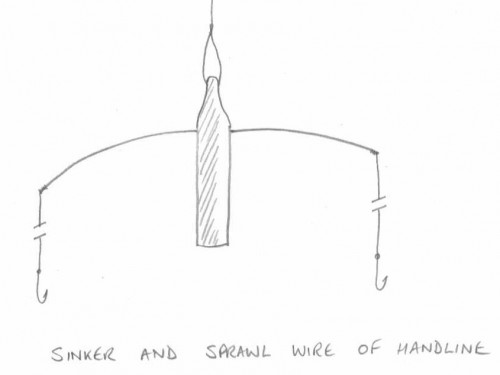 While fishing, which was during daylight only because the men needed to be able to see what they were doing, the smack was hove-to. Each hand worked a line, and usually fishing took place just off the seabed. When the cod were following herring, they were sometimes caught near the surface. The lines were originally baited with halibut (particularly at Iceland) because it had little value, but whelks were later preferred. These were kept alive in the well until needed, at which time the shells would be broken and their leathery texture ensured that they were unlikely to be washed off the hooks.

The quality of fishing would vary during the day and some men could go off watch when fishing was slack: they were soon called back up when the fish began to bite. Those on watch would call “lines!” and those below would turn out and fish. This led to the expression “You ain’t done when your finished!”.

Longlining is a relatively recent method of fishing, having been first tried in the mid 18th century by the fishermen of Harwich. A hundred years later Grimsby emerged as the principle longline port.
A set of longlines would typically consist of some 180 lines each 40 fathoms (73m) long, making a total length of 7200 fathoms (13,167m)- over 7 nautical miles. Each line would support 26 snoods sufficiently far apart from each other so as to not catch up on one another – typically a fathom and a half (2.75m) apart, making a total of 4680 hooks. Each hook was about half the size of those used when handlining as species other than cod were sought. Again whelks were used as bait, and baiting the line took up a good deal of time. The line was shot at dawn, or earlier if the weather was fine, and it was always hauled in the daylight so that the crew could see what they were doing. The line was rebaited as it was hauled. Sometimes two shots were made in the day, depending on how heavy the fishing was. The line was shot across the tide downwind so that the snoods would drift clear of the main line. Often the line was shot at half tide, and the smack would heave to until the turn of the tide when hauling would begin. 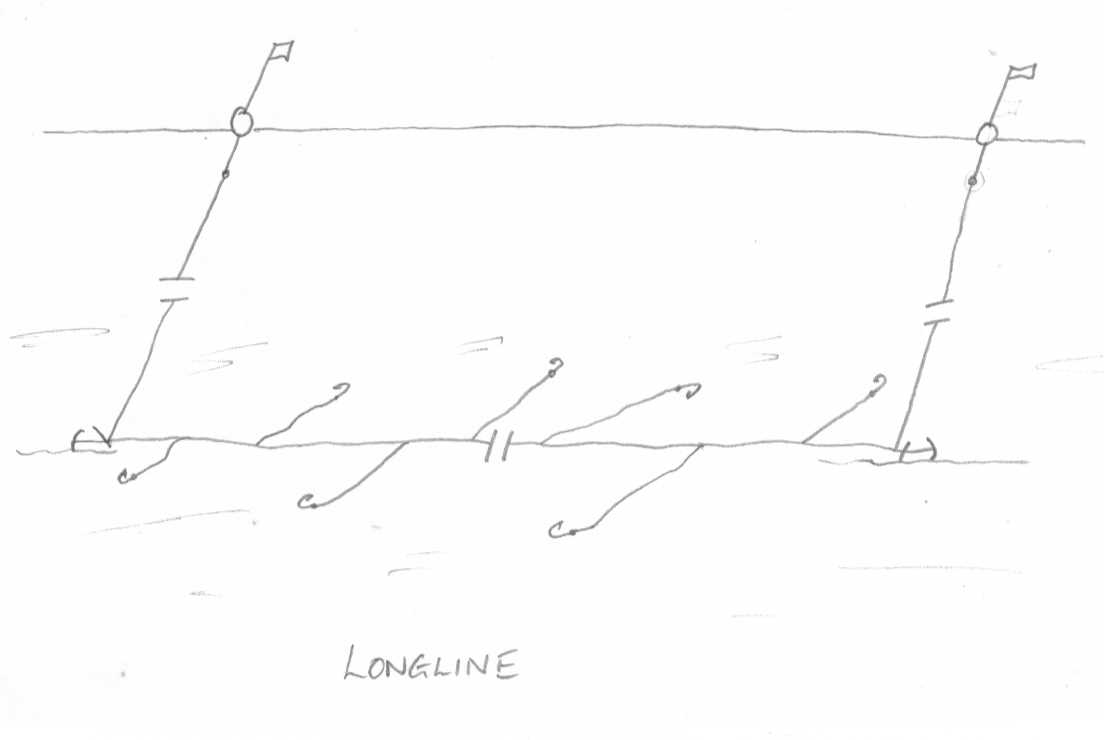 When hauling the smack would lower the foresails and short-tack up the line hauling all the time. Occasionally the line would be hauled into the smacks boat but the weather would need to be very good and the sea calm for this to be the preferred method. The fish would be taken off, the hooks rebaited where necessary, and the line coiled carefully and neatly so that it would run free when shot away.

Whichever method of lining was used, cod was the prime fish sought, and well smacks were used so as to get the fish to market in the best possible condition. However, before they could be put into the well, their swim bladder had to be pricked to allow it to float in the normal attitude; having been brought to the surface quickly the bladder was greatly distended. Other fish would also be caught by longlines, halibut being probably the most numerous. In bad weather fish would be damaged or die in the well; they would be removed and stored in ice.

Longlining trips would rarely last longer than a fortnight. Handline trips to Orkney, Shetland or Iceland usually lasted 14 weeks, but sometimes were longer, even up to one recorded case of 22 weeks.