The explosion at Barking was a tremendous blow to the company and after all claims were met there were only two steam trawlers and some sailing smacks left. For example, Sweetheart (still afloat today) was sold in 1905. However, with this reduced fleet they struggled on until the outbreak of war in 1914. Accurate records of this era are frustratingly sparse. During the war two smacks were commandeered by the navy and fitted out as Q ships. Under this scheme the crews were enlisted by the navy and the ships were fitted with machine guns and depth charges. The smacks, however, retained their sails and appeared outwardly to be fishing vessels. In the second year of the war one smack claimed that it had sunk a submarine with depth charges but the naval authorities refused to recognise the claim as no definite proof could be given. Shortly afterwards another was sunk but this time the skipper lowered the fishing gear and caught the submarine in the trawl remaining on the spot until a naval destroyer came to confirm the “catch”. During the war Roy Hewett and his brothers Graham Hewett and Douglas Hewett all served in the armed forces.

The wholesale business at Billingsgate continued and when the war ended Roy Hewett was able to concentrate his efforts on the business and the Short Blue Fleet started to grow again but this time based at Lowestoft where it remained for a number of years. There is a photograph of Royalist LO17 at Lowestoft. The price of coal now became an important factor and it was found that at the Yorkshire and Lancashire ports, being closer to the mines, coal was about 10 shillings a ton cheaper than at Lowestoft so in 1929 it was decided to move the steamers to Fleetwood leaving only one sailing smack, the Boy Leslie (also still afloat today), at the Suffolk port. In 1931 Peter Hewett went for a full voyage at the age of 11 years in this vessel under skipper F Sutton whose son eventually skippered an Icelandic trawler from Fleetwood. In 1935 Boy Leslie, representing part of the fishing fleet, lined up with all the naval vessels at the Spithead Review. Together with her normal crew were RMH RSH GSH and RPGH – see the page on Boy Leslie.

During the depression of the early 1930’s the firm carried on under W. Wilkinson as Fleetwood manager. He succeeded a Mr Case in 1932 when the latter left to start his own trawling company. In those days there were four old vessels fishing in the Irish Sea off Northern Ireland, initially the Diane, Royalist and Swan but then also Penguin was bought in 1932. The aim was to land quick trips of high quality fish with a quick turn-round of the vessels and in one year the Royalist did 50 trips in addition to spending 14 days in dock for annual overhaul.

Gradually the fleet improved disposing of one ship and buying another. In about 1933 the company got the management of two ships, then bought them and scrapped them. The Bridesmaid (sistership to Swan) was bought. Newland was bought from the Dolby Fishing Co – by unusual means. The owner was a violent man called Ramster and after one bad trip during which the prop was broken he said “sell!!”. Hewett Fishing Co offered £1,000 for the vessel (anonymously) and got her. “Bluey” Gregson went skipper in her, but she had a persistent problem in that the boiler ran 50lb light on pressure. The vessel was sold during the war to Hull Fish Merchants for £10,000.

In 1936 came a great opportunity. The Game Cock and Red Cross fleets of steam trawlers and carriers, last of the fleets of fishing vessels regularly running their catch by sea to Billingsgate, decided to cease operations due to heavy losses. H F Hayward was the chairman of their owning company and was a friend of Roy Hewett. They came to an arrangement and jointly formed a new company, Heward Trawlers Ltd, which in 1937 purchased from the liquidators all the trawlers belonging to both fleets, some 40 vessels. Some were sold abroad and some cannibalised to improve others. Six were reconditioned at Hull, fishrooms put in (the space had previously been used for coal and water), gallows fitted on the port side (why??)  and when completed they steamed round to Fleetwood. In the end the company had 14 serviceable ships. The successful working of these ex-fleeters was a difficult problem as by Fleetwood standards they were under-powered and not designed for the deeper waters and stronger tides of the West Coast. This was overcome by modifying the trawl doors and net design and as a consequence they were all moderately successful vessels until they were disposed of, some regularly working the Icelandic grounds even during the war years.

At the outbreak of the second world war there were 14 vessels in the fleet but these were soon augmented by the purchase of three ex-fleeters from Brixham – Tanager, Warbler and Grosbeak – war conditions having made supplies of coal difficult at that port. Roy Hewett had contacts and business interests in many ports.

Several vessels were requisitioned by the Government for war service and in addition ships were taken from time to time for special services and then returned. Everton, Evesham and Esher were taken to trawl for magnetic mines when these were first laid. Fortunately for ships and crews they did not come across any. One or two were converted for water carrying and Jamaica, renamed All Hallows while in war service, was converted into a smoke boat and served in the van at the Normandy Landings. The Swan was requisitioned but spent the war laid up on the Clyde.

With the need for maximum supplies of fish to meet the national need the vessels started going farther afield, first to Barra Head and the West of Scotland and then to Iceland. This operation, however, was marred by the loss through enemy action of Ladylove (Skipper Fletcher) together with her crew in September 1941. Another casualty was Evesham which was sunk in the North Sea but fortunately the crew were saved. During the war years the company acted as agent for a considerable number of Faeroese and Icelandic fishing vessels and carriers, particularly from the Westmann Islands.

While the war was still on , a change of policy was decided upon which resulted in disposing of smaller boats and acquiring larger modern trawlers with a view to developing distant water grounds. With this in mind St Just and Tekoura were purchased while on war service together with four castle-type boats and the policy of fishing off Iceland was inaugurated. The refitting of these vessels spread over different parts of England and Scotland put considerable strain on the staff involved. One of the vessels was the Beachflower, which after refitting was renamed Robert Hewett. With the return of the vessels the opportunity was taken to send them further afield to Bear Island and the White Sea but they could not compete with the Humber as they had further to steam and the Fleetwood market could only take a limited amount of cod. These problems dictated the fishing policy for the deep water vessels which consequently concentrated on the mixed fishing on the West side of Iceland and the Westmann Islands. As time went on several second hand ships were purchased such as Frobisher, Spurnella, Cape Barracuta (renamed New Prince as Prince Charles had just been born). 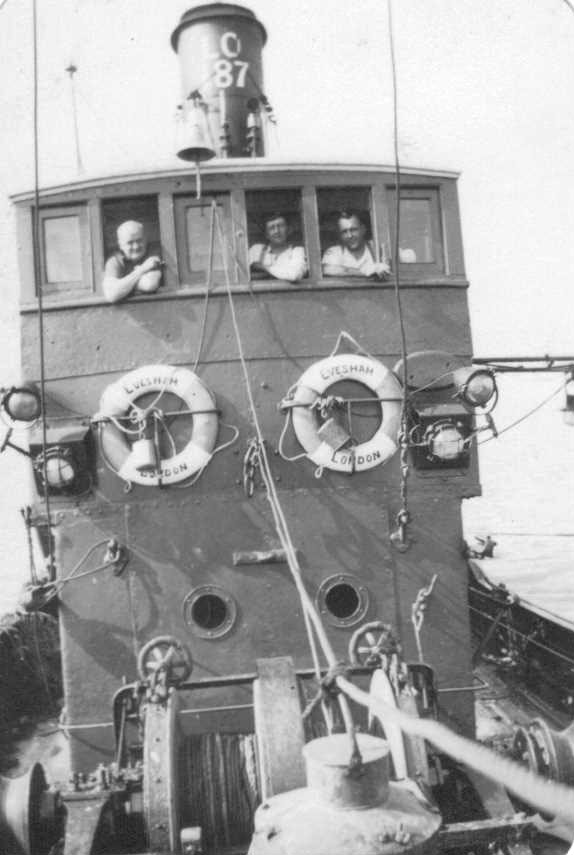 Evesham (Robert Roy Hewett on the left). She was lost in WW2

In 1951 it was decided that any further replacements should only be made by new construction and that there should be no more coal burners. An order was placed with Cook Welton and Gemmell of Beverley Yorkshire for the oil fired steam trawler Ella Hewett LO 47.  She came into service in 1953 and was followed by a sister ship, Samuel Hewett LO117, in 1956. Both proved very successful and  constantly appeared among the highest earners at the port. In 1961 diesel engines were very much more efficient and Robert HewettLO65 was built. She was also very successful and in her first twelve months grossed £120,000. In 1962, her first full year, she was the ports highest earning vessel. Unfortunately that year the Ella Hewett struck a sunken naval vessel (HMS Drake) off Rathlin Island and was lost (all crew saved). She was replaced in 1964 by Ella Hewett LO 94, a sister ship of Robert Hewett. 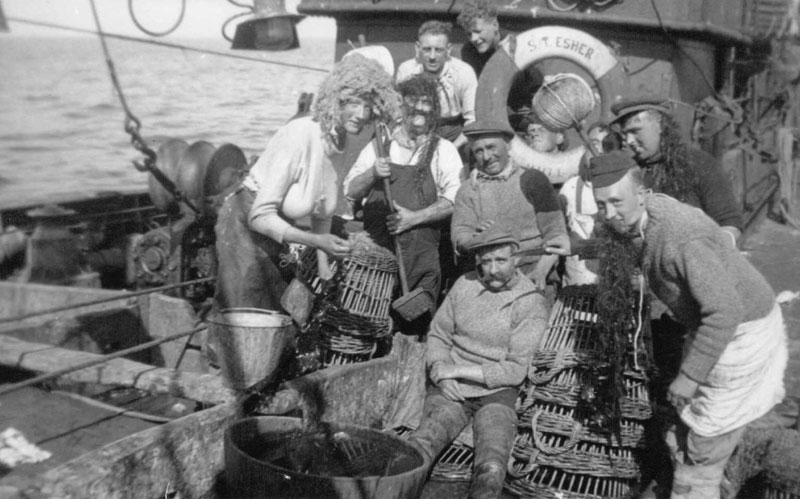 Crew of Esher – Peter Hewett on the left! Note that she was trawling at the time

In the meantime the homewater vessels were reduced to two coal burners. In the early 1950s a demand arose for scampi (Dublin Bay Prawns). Quantities of these were caught in the Irish Sea but never marketed. As an experiment a refrigeration plant was fitted in Royalist LO90. The fish were headed cleaned cooked and chilled and stored in the fridge and the vessel successfully prosecuted this fishery for two years. Unfortunately extensive fishing soon reduced the stocks and she had to return to her previous job of catching white fish. In 1958 advantage was taken of the White Fish Authority Grant Scheme and the two vessels were replaced by two modern new buildings, London Town LO70 and Royalist LO 50.

Times were a changing though. In the mid 1960’s the stern trawler was born. This was as great a change as from steam to diesel power with regards to efficiency. Samuel Hewett was suddenly uneconomical and in 1967 she was scrapped. She was possibly the best looking trawler ever built but sadly caught as the last of her type.

During the 1970’s respective governments decided to protect their home waters and declared unilateral fishing limits. Iceland was the first, moving initially to 12 miles, then 50 miles, and ultimately 200 miles. There were two Cod Wars during which violent clashes between the Icelandic gunboats and English trawlers took place. Norway followed suit. Suddenly the large Hewett vessels had nowhere to fish and hard times came.

In 1973, the seventh fishing generation of Hewett (Robert) spent 14 days off Rockall on the London Town as his maiden (and sadly only) trip on a Short Blue Fleet vessel, aged 14.

The Robert Hewett and Ella Hewett were sold to Colne Fishing to be converted to oil rig stand by vessels; St Kitts and St Luke. By that time the fleet also had Kennedy FD139 (ex Boston Britannia) and SSAFA FD155 as mid water trawlers. They were very capable of fishing Faroes and Iceland in summer and home waters in winter but they needed the summers in Iceland to be viable. London Town and Royalist continued to fish home waters successfully and indeed Admiral Hawke A320 was bought from Aberdeen to augment their size of vessel but the larger vessels’ losses dragged the shorebased infrastructure down interminably. London Town was sold to Colne Fishing, Royalist to Boston Deep Sea Fisheries (for a very short time only and then on into private hands) and SSAFA and Kennedy were scrapped. Admiral Hawke was presumably scrapped .

Robert Hewett and Ella Hewett were scrapped in 2003 following a lengthy lay up in the Fal, Cornwall.